Great On-The-Shift Restaurant Stories that Will Inspire You Working at a restaurant can be a grueling job; you need a ton of energy, great people skills, and an infinite supply of patience. But waiting tables can also be an extremely fulfilling job – both due to the people you encounter both working at the restaurant and the customers who are there for you to serve. If you are feeling discouraged about your job at a restaurant or just want to hear some shift stories that will inspire you, check these out – they’re true stories that show just how much a restaurant and service job can pay off…

1) 20-year-old Jessica Osborne had been working at Pizza Hut in Angola, IN for several years when she finally had a shift that would change her life forever. Osborne had always wanted to get her college degree and become a professional photographer, but after her first two years at a local college, she was forced to withdraw because she couldn’t afford her tuition and textbooks – and she wasn’t given enough financial aid. Osborne continued to work at Pizza Hut, trying to earn enough money to support her family and put herself through school. During her time working at Pizza Hut, Osborne got to know a woman named Becky (who hasn’t publicized her last name), who always ordered a Meatlovers pizza, and who chatted with Jessica about her struggles.  After one seemingly normal night, Becky chatted with Osborne, signed her bill, and left. When Osborne picked it up, she saw that Becky had left her a $10,000 tip – much higher than the standard 15%! It turns out, Becky had never mentioned that her husband and eldest daughter had been killed in a car accident, and she had recently come into a lot of money from the settlement. Becky wanted to help Osborne make her dreams come true, so she decided that sharing the money with the budding photographer was the right thing to do.

2) At a Ruby Tuesday in New Hampshire, waitress Sarah Hoidahl encountered two National Guard Employees, and after serving them, she decided to pick up their tab of $27.50. She wrote them a note saying that she wanted to take care of them during the government shutdown. The National Guard employees were so touched that they put the note on Facebook, and through the magic of social media, Hoidahl’s deed got to Ellen DeGeneres. DeGeneres was so touched by the story that she invited Hoidahl to be on her show. During her appearance, she awarded Hoidahl with a brand new 50” flatscreen TV. At the end of the show, Hoidahl was stunned when Ellen told she was “tipping” her $10,000 for her generosity and selflessness. Hoidahl, who is a single mother and full-time waitress, explained how DeGeneres’ tip would change her life forever:

3) Nikki Pirog was waiting tables at Daedalus Restaurant in Cambridge, MA when a man handed her a note. The note read, “Do me a favor and bring me their check too. Someone just got diagnosed.” Apparently, the man had overheard the women’s conversations and noticed that both were visibly upset. Pirog combined the two tables’ checks and allowed the man to pay for their check before he left. After he signed his bill, he left another note thanking the waitress for her help and telling her to send the women at the other table his best wishes. When Pirog told the women that an anonymous man had paid their bill, they were overcome with emotion and thankful for the little ways that the world takes care of you when you most need it. Pirog posted her story and pictures of the notes on Reddit, and she sparked a huge, viral response across the world. She said that moments like that one in her restaurant reminded her of the goodness that exists in the world. 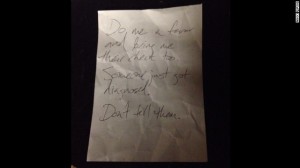 We would love to hear YOUR restaurant job stories – good, bad, ugly or otherwise.  Share your favorite with us!